Kurt Loudenback’s journey to becoming the owner of Grand Prairie Foods begins on a dairy farm in Ohio where he was born and raised. Growing up on a dairy farm taught him independence, and he fell in love with the self-reliance and grit it took to be a farmer.

When he left for college, he had every intention of returning back to the farm. Life had other plans for him though, and he was encouraged by his father to pursue other opportunities for his life. During Christmas break of his junior year in college, his dad suggested he find a different job for the upcoming summer, rather than working at home on the farm.

Kurt took this suggestion to heart, and he looked for a new opportunity. He got an internship with Purina as a summer agribusiness intern, and he soon found a new passion and path for his life.

After graduating from college, Kurt went to work for Purina. He became passionate about business, and he learned a lot about supply chain structure in agriculture and professional sales. He realized how much he enjoyed business, which dissuaded him from returning to the farm.

Kurt built a successful career for himself at Purina, but it came at a cost. Throughout his 19-year career at Purina, Kurt moved 6 times, and 3 or 4 of those times were with small children after he started a family with his wife, Valerie.

Although he had a successful career in upper management, Kurt and his family were tired of moving, so he decided to pursue a new opportunity. He was offered a position with a new company in Sioux Falls, South Dakota. That opportunity required another move, but Kurt was ready for a new adventure in life that would offer a new place to call home. Not long after beginning work for his new company, however, Kurt’s expectations didn’t line up with the reality of his new job, and so he began to search for something new.

Owning a business had been a desire of Kurt’s since growing up on the dairy farm. The lessons in independence and grit he learned resonated with him, and they made him realize how badly he wanted to own his own business.

Although it was disappointing that his new job in Sioux Falls wasn’t meeting his expectations, Kurt was happy to wave the white flag and move on to the next chapter in his life: owning a business.

The conception of Grand Prairie Foods begins with the procurement and failure of another business. Kurt found a food production and supply company for sale in Sioux Falls and he decided to buy it. Rather than starting from scratch, Kurt decided to buy this existing company, because he knew his strengths and weaknesses well enough to know taking over an existing operation would be better for him. After purchasing the business, though, Kurt’s expectations once again got ahead of him and he ran into some snags that eventually culminated in needing to shut the business’ doors 6 weeks after his acquisition.

The fresh excitement of becoming a business owner quickly wore off because of the unexpected challenges Kurt faced. They had to shut down operations, essentially moving backwards in the wrong direction, so they could figure out how to make their new business work. This period was very stressful, but Kurt had great support from his wife and management team, whom he relied on for support as they figured out what to do. They knew they didn’t have any other option than to make the business work, so they just figured it out.

Fortunately, they strategized and reworked the business to move it in the right direction. This was in part due to a hidden gem Kurt found early on. Some of the equipment that came with the business acquisition could be used to make stuffed sandwiches like calzones and stuffed biscuits. They realized this would fit in well with a market they called “dashboard diners” who were looking for fast meal options that they could eat while driving or on the go. They poured their resources into making these dining options and distributing them which paid off, giving them some of their first major success as a business.

Part of this success came from their partnership with the hotel chain, Hampton Inns. Kurt contacted executives at Hampton, describing some new stuffed biscuits he thought would be perfect for their breakfast options. The next day he heard from an executive chef at Hampton asking for samples to be sent the following day to Chicago. They were looking for new breakfast options, and they liked the stuffed biscuits Grand Prairie Foods produced, so a business partnership between Hilton Hotels and GPF was born.

Grand Prairie Foods success over the last decade and a half is due to the tireless efforts by its staff and the persistence of Kurt and his wife, Valerie. Kurt is the first to admit he couldn’t have done it without the supportive people in his life, and he recognizes how important all the lessons he learned throughout his life have been, including those he learned from his time at Purina, such as operational excellence, professional sales, and a “never give up” attitude. They all set him up to effectively run Grand Prairie Foods, but the most important lessons he learned were those of independence and hard work from his beginnings on his family’s dairy farm in Ohio.

Kurt Loudenback was born on a dairy farm in Ohio and is the founder of Grand Prairie Foods in Sioux Falls, South Dakota. After working for Purina as a summer intern, he realized he loved business and wanted to find a different path in life from dairy farming. This led him to a 19-year career at Purina where he learned about operational excellence, professional sales, and other skills that helped him become a successful business owner. The most important lessons he learned, though, that have informed his persistent quest to operate a successful business, came from his days growing up on the dairy farm: persistence and grit. 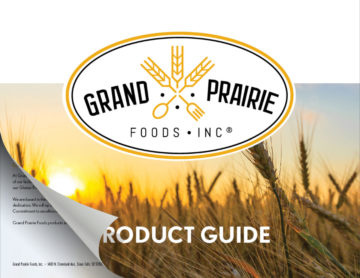 Check out our latest product guide featuring all of our newest products. See something you like? Grand Prairie Foods products are available through Dot Foods or your local distributor.

LEARN ABOUT OUR PRODUCTS

Family is at the heart of how we produce food. From our people to our food – they are what inspires this business every day. Commitment to excellence is a part of every facet of Grand Prairie Foods – quality food is what we do.

We are devoted to providing our customers with the best quality cuisine. Our passion doesn’t stop at quality food but reaches outside our doors. We are committed to giving back to the community that has been so good to us.

We provide our customers quality, delicious food while maintaining a gold standard of quality. Check out our line of products.

We have delicious food options for nearly every industry with the capability to custom create what you need.